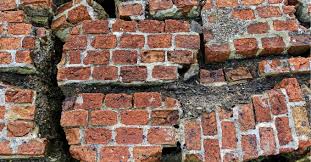 An unexpected building collapse occurred Wednesday nearly killing two individuals as they passed along the sidewalk.

Security camera footage from across the street captured the event. First, the two passersby make their way along the sidewalk directly in front of the building. A fence surrounds the structure, as the property owner sought to convert the building to apartment units.

As the two pedestrians enter the crosswalk, a subtle shift of brick above the structure’s front door appears to give way. Then, in short order, the entire façade crumbles. Bricks collapse into heaps that spill across the property, demolishing the fence. A stop sign bends until it smashes against the hood of a parked van. Debris from the top of the building manages to reach over the sidewalk. More bricks bounce across the street. Dust fills the air.

Had the passersby delayed themselves by seconds, or had the building given out a few short moments prior, the scene would have been far more gruesome.

Instead, the building collapse narrowly misses them as they rush to the other side of the street.

Furthermore, in another example of uncanny timing, a passing fire engine pulls to a stop in front of the rubble.

Truck 13 from Trinidad station, returning from a call, witnessed the collapse a block away as it neared the intersection.

They secured the scene and tended to one of the pedestrians who sustained minor injuries and received treatment at a nearby hospital.

A K-9 unit searched the rubble for possible victims but found none. Luckily, the collapse claimed no lives. Additionally, its collapse didn’t pose structurally threats to nearby buildings.

Now, the Department of Consumer and Regulatory Affairs must make a determination regarding the structure. Their assessment concludes whether the building receives stabilization measures or if it faces emergency demolition. If the building doesn’t meet DC’s safety requirements, it could be demolished.