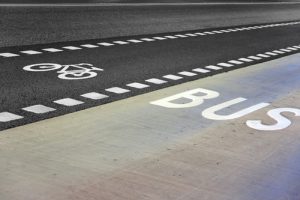 The District Department of Transportation study is getting underway through Howard University and Virginia Tech civil and environmental engineering Associate Professor Kevin Heaslip to analyze the options for photo enforcement of bus lanes and other bus zones in the coming years.

“If people are using the bus lanes inappropriately, then it causes the buses to be stuck in the same traffic that all of us are stuck in when we’re driving our vehicles, and that’s not really a good thing, especially when you think that these buses in the peak hours would be heavily loaded with passengers,” Heaslip said in an interview.

The short bus lanes the District has are often ignored by drivers, a DDOT presentation about the study said, which reduces the cost-saving and timesaving benefits of having the bus lanes in the first place.

Automated enforcement could push more people to follow the rules even when police officers are not around, a Metropolitan Washington Council of Governments report completed last year suggested.

Bus lanes could soon be even more important, as Metro finalizes a major overhaul of its bus system.

The District is in separate work on bus lanes along 16th Street and H St. NW even though the details of the overhaul remain closely guarded within the agency.

Along with H St. NW near the White House, a bus-only lane that would run against the flow of existing traffic would turn the road into a two-way street for buses only between New York Ave. NW and Pennsylvania Ave. NW.

More than 30 Metrobus routes stop in that area, including trips that carry about one in five of all Metrobus trips each day. Other transit agencies also serve the area, and commuter buses could be permitted to use the lanes to pass through.

There will be cameras mounted on buses, that could automatically snap photos of drivers illegally driving or parking in bus lanes or bus stops, or cameras that are stationary on the side of the road similar to the District’s speed cameras.

The cost of bus-mounted cameras approximately $10,000 plus maintenance for each bus, while stationary cameras cost about $65,000 per camera plus maintenance costs, the Council of Governments’ study estimated.

DDOT appears to be leaning toward stationary cameras now, especially since that would reduce the need for interagency coordination on any maintenance and repairs, or the need to install cameras on the hundreds of buses that crisscross the city.

The conclusions of the study are expected this fall.

DDOT could then buy the bus-lane enforcement cameras if they are found to be useful and are in line with any enabling legislation that would be required from the D.C. Council.

“This project will look to identify both the ability of the District to implement differing enforcement systems as well as the costs and benefits,” DDOT said in responses submitted to the council earlier this year.

The city is mainly focused on bus lanes next to the sidewalk, some of which might only be enforced during rush-hour.

The study is also analyzing any potential jurisdictional issues as bus lanes expand across the city since in some cases roads or sidewalks are controlled not by the District, but by the National Park Service or other federal agencies.

Taxis are generally allowed in the District’s bus lanes today.

New York, San Francisco, and London have slightly lower fines, but use photo enforcement to reduce the amount of time police officers must spend focused on the issue and reduce the disruption caused by pulling over a car in the bus lane which adds to the delay for buses.

“Compared to active police enforcement, automated enforcement can have significant fiscal and enforcement benefits,” the Council of Governments’ study concluded.

The study found automated enforcement with clear information available about the rules for using the lanes was effective. Painting the lanes red as the District has on the short stretch of bus lane on Georgia Ave. NW. was considered helpful to drivers.

Any photo enforcement of the lanes in Maryland, Virginia or the District would likely require new legislation or regulations, which can sometimes take several years to finalize.