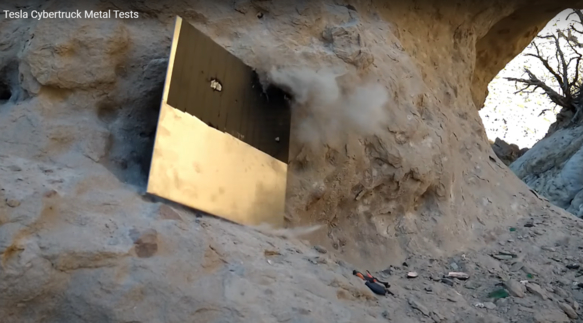 The Cybertruck is a lot of different things all mashed up into one. A space-age futuristic look has had many on the fence, but when you look at all the other features, the truck might not be a bad idea.

From the self-driving features to the towing capacity to the fully-electric motor – the Cybertruck was the worlds first fully electric pickup truck. One main feature that we did not get to see during its unveiling was how bulletproof the siding was.

Now, for many cars, being bulletproof isn’t one of the more focal points of purchasing a car. Fortunately, for Tesla, people think that its actually cool.

Well, during theinveiling of the truck, multiple attempts were made to show how rugged the truck actually was. From smash-proof windows (that still actually smashed) to the bulletproof siding ( which didn’t hold up well), the truck displayed less than what was offered.

Well, to get a better answer, a Youtuber by the name of Bob Edwards showcases how bulletproof the truck actually is.

The truck showcases a much more resilient outer shell. Much better than the one during the unveiling.

The Cybertruck Can Take a Beating.

The truck displays being able to handle 9mm rounds. In every section the panel was struck, only a large dent could be made.

In comparison to a regular sheet of steel that is roughly the same thickness, the bullet just passes right through. In-all, the showcase of durability passes the test in terms of stopping bullets.

Unfortunately the second failure (the windows) could did not undergo the same tests as the door panels. The potential for them to stop bullets is also a big feature of the truck. While this test was not made, the potential for a more appropriate showcase can be expected during the actual launch of the truck.

The Cybertruck is currently in pre-orders. Those who have ordered will have to wait until 2021 to get behind the wheel.

Tesla Cybertruck Capable Enough To Power Up A Camper Vehicle.