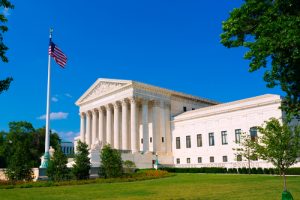 The highest court rejected a challenge that the ban discriminates against Muslims or exceeded the president’s authority. Of course, the vote was straight down to ideological lines. The five conservative-leaning justices voted in favor of the ban, while the four liberal-leaning ones voted against it.

Chef Justice John Roberts wrote the majority opinion for the 5-4 decision. He said that presidents have the power to regulate immigration.

The policy was the third attempt by the Trump Administration to restrict immigration. All in all, it applies to seven countries: five with predominantly Muslim populations and two non-Muslim countries. The argument topic was not the national security of the ban but the intolerance towards Muslims. Many said the point was banning Muslims from the United States in the months leading up to the 2016 election.

The ban applies to travelers from five countries where a majority of the populations are Muslim and include Libya, Iran, Somalia, Syria, and Yemen. Two other countries, North Korea and Venezuela, will also have travel restricted.

Many in Washington Disagree with the Trump Travel Ban

Justice Sonia Sotomayor said in the dissent Trump’s statements were incredibly relevant to the policy:

The majority here completely sets aside the President’s charged statements about Muslims as irrelevant. That holding erodes the foundational principles of religious tolerance that the court elsewhere has so emphatically protected. It also tells members of minority religions in our country “that they are outsiders, not full members of the political community.”

She compared the decision to the infamous one in 1944 that sided with the implementation of Japanese-American internment camps and pointed out many affected by the decision Monday are U.S. citizens. They live all over the country, from DC to Denver.

“Ignoring the facts, misconstruing our legal precedent, and turning a blind eye to the pain and suffering the Proclamation inflicts upon countless families and individuals, many of whom are United States citizens.”