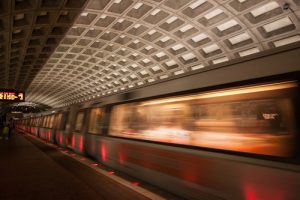 Capitals fans who plan on watching the Stanley Cup game tonight can take the metro home. The metro in Washington D.C. will stay open late only tonight for those who will be watching the game outside. This is the first agreement to extend hours that the Metrorail system has ever accepted. Since the Caps are one win away from getting their first Stanley Cup championship, most places will be open late, even the metro.

The metro will stop 30 minutes after midnight tonight, which is an hour later than their normal weekday hours. Monumental Sports and Entertainment agreed to pay the Metrorail $100,000 to extend their hours for the game tonight. MSE is the parent company of the Capitals.

Three Stations Will Stay Open Late for the Stanley Cup

For those who plan on watching the game somewhere out in town tonight, the metro has three stations open for entry. Gallery Place, Metro Center, and Judiciary Square will be open to access the metro tonight. Any other stations will only be available to exit.

For Gallery Place, the trains that are scheduled to depart last are in a few different centers. Red Line to Glenmont, Shady Grove, Green Line to Branch Ave, Greenbelt, and Yellow Line to Huntington. All will depart no later than 12:30.

As for Metro Center, the last departures are from Orange Line to New Carrollton, Vienna, and Blue Line to Franconia-Springfield, Largo Town Center, and Silver Line to Wiehle-Reston. The last departure will be at 12:40 AM.

Since this is the Caps’ closest chance to winning the Stanley Cup championship, MSE is making it more convenient for those who need to use the metro to get back home. Any additional information regards to overtime for their hours can be found on MetroAlerts. The arena will also announce metro information during the game.

So, for those who plan on watching the game tonight, whether at the arena, at a bar, or at a friend’s house, the metro will be available when the game ends. Unless you’re coming in from Baltimore, you’ll have train service to get yourself home. Be safe and have fun!