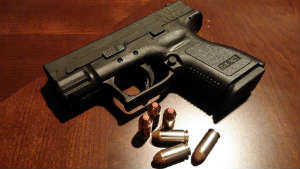 WASHINGTON, DC – Police are on the hunt for two men and a woman suspect believed to be responsible for an H Street shooting that occurred last month. They’ve now released surveillance footage showing the wild scene when shots were fired.

The incident happened inside Quara Ethiopian Restaurant on H Street just after midnight on Jan. 27. The police report reveals the shooting spiraled out of a verbal argument when a man pulled out a gun and fired at another man.

The surveillance footage, which can be seen on the D.C. police’s Twitter account, clearly shows the violent exchange. After being shot multiple times the victim was also kicked and assaulted with a bar stool by the gunman and another perpetrator. Be warned, the video is grisly and disturbing.

According to Commander Leslie Parsons, with the D.C. Police’s Criminal Investigations Division, they released the video, because the crime is such a horrible offense. “We’re asking the community to come forward and assist us in identifying these suspects,” Parsons said.

The victim was rushed to the hospital and is now there recovering from his injuries. The incident is being treated as an assault with intent to kill.

In the video, partially shown in black and white, a cluster of customers are shown at the bar, apparently attempting to break-up the fight, when suddenly a man in a hoodie and light colored stocking cap brandishes a gun and opens fire. Based on the footage, there appear to be five gun flashes.

From another camera view, the victim can be seen on the floor grabbing at his leg, while the gunman kicks him. The other assailant appears to be slamming a bar stool atop the fallen man.

The tail end of the footage, which is in color, reveals a woman with red braids grabbing the gun from the floor.

According to Parsons, police are still actively seeking a motive. They are requesting any tips about the shooting and those with information can call the D.C. Police at 202-727-9099. Information can also be anonymously texted at 50411.

Does the shutdown impact the animals at the National Zoo?