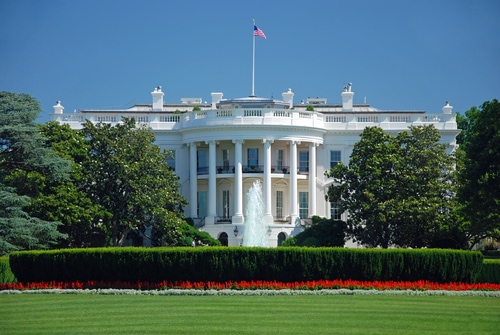 The woman who rammed a security barrier at the White House with her van was armed with a pistol, according to police records. Also, she had been arrested for trying to climb the White House fence twice in 2017.

35-year-old Jessica Ford of La Vergne, Tennessee was taken into custody by U.S. Secret Services about 3 p.m. after she struck the pop-up barrier near the White House, at 17th and E streets, according to the Secret Service.

No one was injured, and no shots were fired in the incident, the Secret Service said, but a witness said he heard what he thought sounded like gunshots.

“After she hit the barricade, she just kept pressing on the gas and trying to push through, I guess,” Chris Bello said. “That’s what it looked like. And then they ordered her to stop, and they fire because she wouldn’t stop.”

He said it sounded like two or three shots.

It appears officers may have used something to smash the van’s windows, possibly to get Ford out of the vehicle.

“I heard like a firecracker,” witness Kimberlie Flauto said. “It didn’t sound like a crash or anything and then I turned around and saw all the smoke and as soon as I saw all the smoke. And all the police were starting to pile out the back of the White House and from across the street. And then everybody’s just screaming, ‘Go, go!’ and that’s when I told all the kids, Go.'”

According to a police report, an officer saw a gun in Ford’s hand before she was taken out of the van. Officers arrested Ford and charged her with unlawful entry, carrying a pistol without a license, unregistered firearm, aggravated assault on a police officer, assault with a dangerous weapon-car, destruction of government property and contempt of court.

Records state that while officers were taking Ford to jail she said, “she had the ‘BB gun’ because if James Burris was the president the officers would shoot her to protect him and that she knowingly brought the gun with her.”

A law enforcement official said the Secret Service knows Ford because she’s been around the White House before. She’s believed to have mental or emotional issues.

Ford was again charged with several criminal violations and taken to the Metropolitan Police Department.

The White House was locked down but concern about the incident was low. The area was blocked by the Secret Service and George Washington University police officers.

Operations at the White House returned to normal before 6 p.m.

“Thank you to the great men and women of the United States @SecretService for a job well done!” the president tweeted.