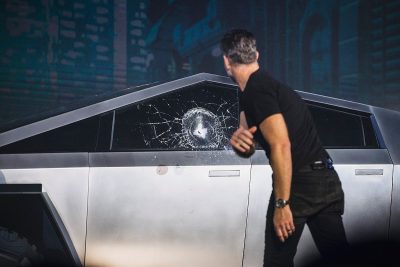 The Tesla Cybertruck has turned more than its fair share worth of heads recently. With the electronically enhanced engine, the Cybertruck has shown the world that power can come from a non-fossil fuel-powered vehicle. The results have been…mixed, but the question still remains: Is it worth it?

While Tesla prepares to handle the pickup market and compete with powerhouses like Ford and Chevy, the Cybertruck has shown great strides for an electric truck. With multiple options that allow for more horsepower, this truck can handle quite a bit. Unfortunately, the highest it can go is just higher than that of the F-150. If Tesla wants to go bigger, they need to make some pretty serious advancements, but that will come in time.

So, unfortunately, during the unveiling of the truck came the sad fact that the windows weren’t exactly shatterproof. On stage, the test failed while the windows did get smashed. This is simply a minor setback as the company prepares to double down on reinforcing the windows. As for the body of the truck, it seems pretty solid. Much more than the plastic bodies of cars and trucks on the road right now.

This is where we have concerns. Where the Tesla Cybertruck wants to take on Ford’s biggest seller, the F-150, the ability to tow is important. Unfortunately, the F-150 isn’t a tower, but more of a hauler. In a video presented by Tesla, it shows the Cybertruck actually handling a tug-of-war with an F-150 with ease. But again, the F-150 might have towing capabilities, but its main design is for hauling. So the Tesla Cybertruck can handle a heavy tow, but the design of the vehicle presents less hauling capabilities. It seems like Tesla didn’t find the right mark on this one.

Still, the new Tesla Cybertruck is an exciting new ride that might be worth it for many buyers. If you’re one of those buyers, ship your new toy home with our door-to-door auto shipping!

Tesla’s hyperloop to Maryland is closer to reality than ever!

Ford Maverick Undergoing Tsunami of Problems And Nobody Knows It